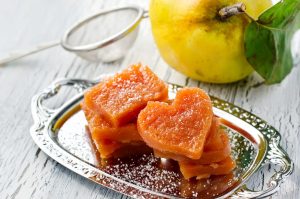 Quince marmalade is troublesome, but worth it. You will get an elastic, fragrant “fruit cheese”, which can be stored for a long time and enjoy its concentrated taste of quince.
Regarding quince, you need to make an important note: you must choose a fragrant quince. Now on sale a lot of quince here of this type.
They are beautiful, even, without tubercles and potholes of light yellow fruits, this variety does not have an intense smell. This quince smells when sniffing it close. We need such a quince, the aroma of which you feel only upon entering the room where it is located. This is a solid, irregularly shaped, such – in the hillocks and potholes of a quince.
Another important note is the safety technique when cooking marmalade. Quince marmalade and strives to shoot hot splashes, if you gape and stop interfering with it. Even if you are confident in your care, you should not start a business without armed with a long-handled mixer (such as a wooden spatula or spoon) and gloves. Cook in long-sleeved clothes so that the spray has no chance of getting on the skin.
quince – 3 kg
sugar – 1.5 kg
water – 1.5 cups
Wash the quince, if there is a stem, remove them and cut them into large slices (four or six segments depending on the size of the quince). Remove the seeds, but do not cut the core, we need the pectin in it, thanks to which the marmalade will thicken.
Put the quince in the pot and pour water into it. Cooks under a lid over low heat until the quince slices are completely soft.
After this, we use the immersion blender to work out the contents of the pan, and then add sugar and continue cooking. From this point on, the contents must be interfered continuously and be protected from possible splashes. Cook marmalade need not less than an hour, sometimes the process can stretch out for a longer time. To determine that the marmalade is ready, you can on the basis of the changed color. At first, the marmalade is cloudy, and when the process is nearing completion, the mass begins to become transparent. Marmalade is better to digest than undercook. In the latter case, it simply does not freeze, the mass will remain liquid.
Pour the prepared mass into the form in which it will harden. Any container with a smooth surface — a bowl, a baking dish — anything can play the role of a mold. It is important that the thickness of the mass poured into the form is not more than 3-4 centimeters, so that the solidification of the mass does not stretch for a long time.
Leave the marmalade in the form for a day. Then remove and cut into several pieces. You can roll them in powdered sugar or granulated sugar.
Marmalade looks even more beautiful, if for cutting use curly cuts for cookies.
Persimmon marmalade
any type of persimmon – 1 kg
sugar – 500 g
water – 500 ml
For marmalade, only fully ripened persimmon is suitable, which you will first try to make sure that it does not knit. In marmalade, despite the fact that it is brewed, the astringent taste is preserved, heat treatment does not eliminate it. Therefore, test every Hurmink that goes into action.
Best of all, if you can remove the skin from the fruit. This can be done using the same technique that is used for tomatoes: immersion in boiling water for a few seconds, and then moving into ice water. After this manipulation, the skin is separated from the pulp easily. If the persimmon is so ripe that it is not possible to peel – no problem. The texture of the marmalade with the peel be a little rougher, but in principle it does not change things.
Do persimmon need to remove seeds and of course the stalk. After that, the fruit must be cut into large chunks and covered with sugar. Let it stand for three hours in this form, then begin to boil by adding water. Allow the mixture to boil, and then let it simmer for 25 minutes. You need to interfere with the mass constantly. You can work out the mass with a blender, but most likely, the pieces of persimmon themselves will melt into a homogeneous mash-like mass. After that, marmalade can be poured into jars. It will be viscous as jam, if you want to achieve greater density, then you have to add jelfix. 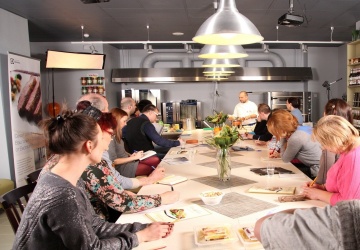